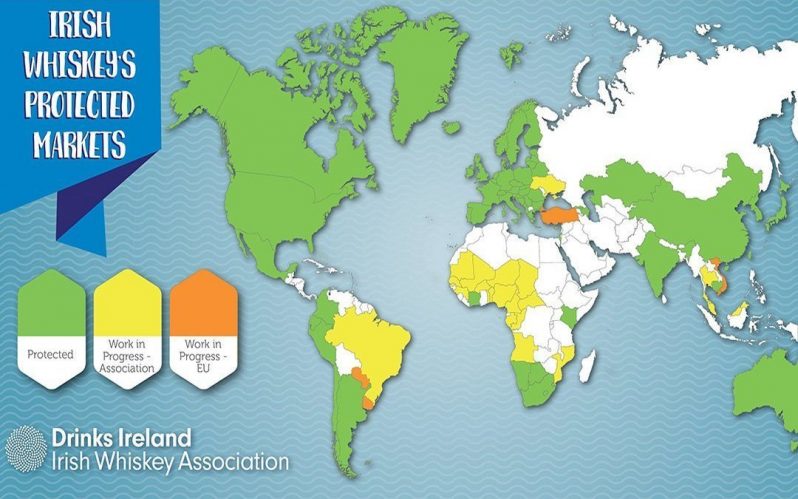 Drinks Ireland|Irish Whiskey Association has successfully registered Irish whiskey as a protected geographical indication (GI) in Belarus. GI recognition means the description “Irish Whiskey” can only be used on whiskey fully produced in Ireland in accordance with Irish law.

The successful application for protection in Belarus follows on from the coming-into-force recently of GI protection for Irish whiskey in each of China and Vietnam on foot of EU agreements.

This registration means Irish whiskey is protected and defined in Belarus for the first time and is another milestone for the category. Eighty-five per cent of global whiskey sales are now subject to some form of legal protection, meaning they are sold in markets where only authentic Irish whiskey can be sold.  It also means much tougher enforcement action can be taken against fake Irish whiskey products. In turn this greatly will benefit consumers as they can enjoy Irish whiskey confident in the quality and authenticity of the product.

Belarus is a small but emerging export market for Irish whiskey with 21,000 cases of Irish whiskey were sold in Belarus last year, which was an increase of 56 per cent on 2018.

Commenting on the registration, Carleen Madigan, Legal Advisor of the Association said:

“In 2019, we encountered fake Irish whiskey products produced by a Belarusian distillery for sale in Belarus and for the larger Russian market. This fraudulent use of Irish whiskey hurts both our producers and consumers. This achievement will greatly enhance our ability to defend the industry against these rogue traders that seek to cash-in on the reputation of genuine Irish whiskey, which ultimately threatens the integrity of the category and the reputation it has built up over many years.  It also undermines consumer confidence in genuine Irish whiskeys.”

“Strong legal protection in such an important emerging market forms the solid foundation on which the industry’s success is built. This will ensure Irish whiskey maximises its potential and maintains its growth trajectory”

Pot still Irish whiskey - through the definitions
Have you heard that one?
Beer barrel aged whiskeys
Irish whiskey gets Gi protection in China
×